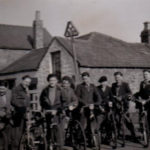 After a long period of riding we came to an old ruined Roman Fort. It wasn’t much so we went straight on. The leader saw the old ruined Roman Fort at Housesteads and told us to stop. The price to go and see it was 6d a person. The leader told us the hostel was about 3 miles away. It took us about a quarter of one hour but it wasn’t open se we went straight down to the cafe … END_OF_DOCUMENT_TOKEN_TO_BE_REPLACED

On 27th December 1950, six of us went on the first school cycling tour. The names of the boys who went were John Purvis, Robert Dawson, Edward Fulcher, Leslie Alderton, Edward Lawson and the leader was Mr Brown. After meeting at Mr Brown’s home at half past nine, we set out over snow covered roads which changed to rutted iced roads near Durham. When we got to Durham, the roads … END_OF_DOCUMENT_TOKEN_TO_BE_REPLACED