Thomas Kenny was born in 1882 at South Wingate, known locally as Hartbushes. There’s nothing left of the Harbushes community where Kenny grew up – just a dwelling house that used to be a shop.

Harbushes was a pit village served by the Roderidge pit which closed in 1860. The residents of Hartbushes lived in hope that their pit would re-open but it never did. 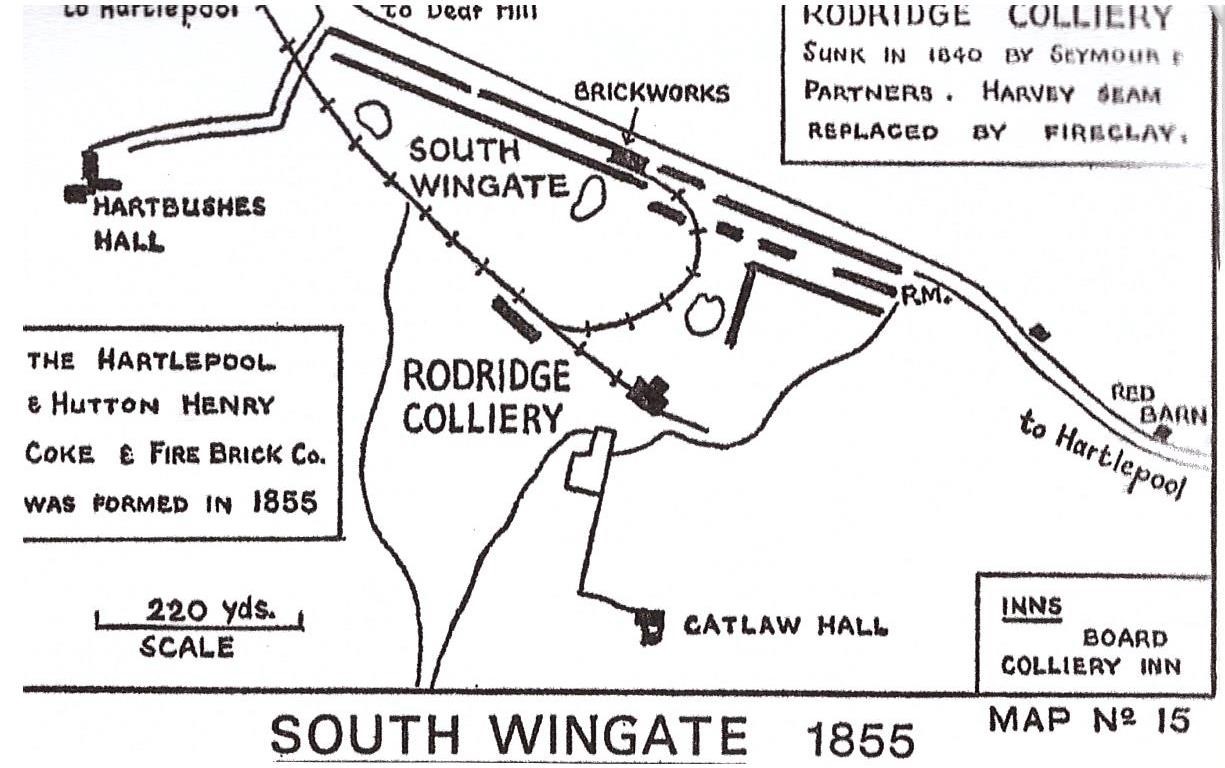 Kenny’s parents were Darby Kenny and Mary Maguire. Darby Kenny worked in one of the many brickworks in the East Durham area at the end of the 1800’s. He was born in Wolviston and his wife in Pontefract.

The family were Roman Catholic and there appears to have been a big community of Catholics living at Hartbushes. It may be as a result of St Peter’s and Paul’s Catholic church being at Hutton Henry and easily accessible over the fields from Hartbushes and it is here that all of the major events in Thomas Kenny’s life took place. 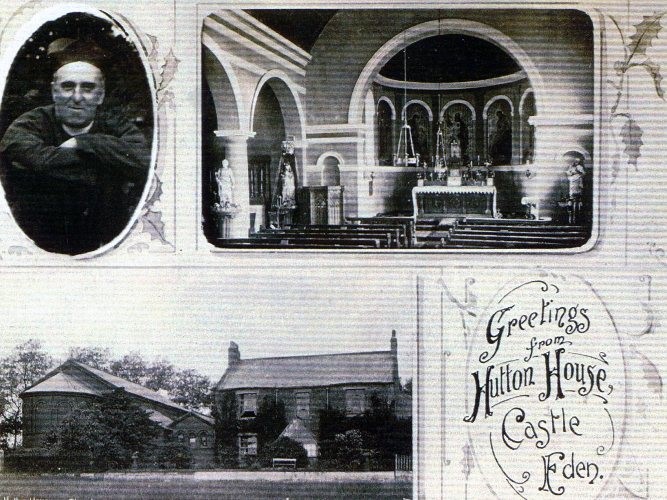 When he first left school, Thomas went to work in a local quarry and when he was 14 he got a job at Wingate pit.

He married when he was 21 years of age in 1903. He was married at St Peter’s and Paul’s Roman Catholic Church, Hutton Henry to Isabella Applegarth from Coxhoe and they had seven children before the First World War. At the time of the 1911 census Thomas, his wife and children were living at Walker’s Buildings, Hartbushes. 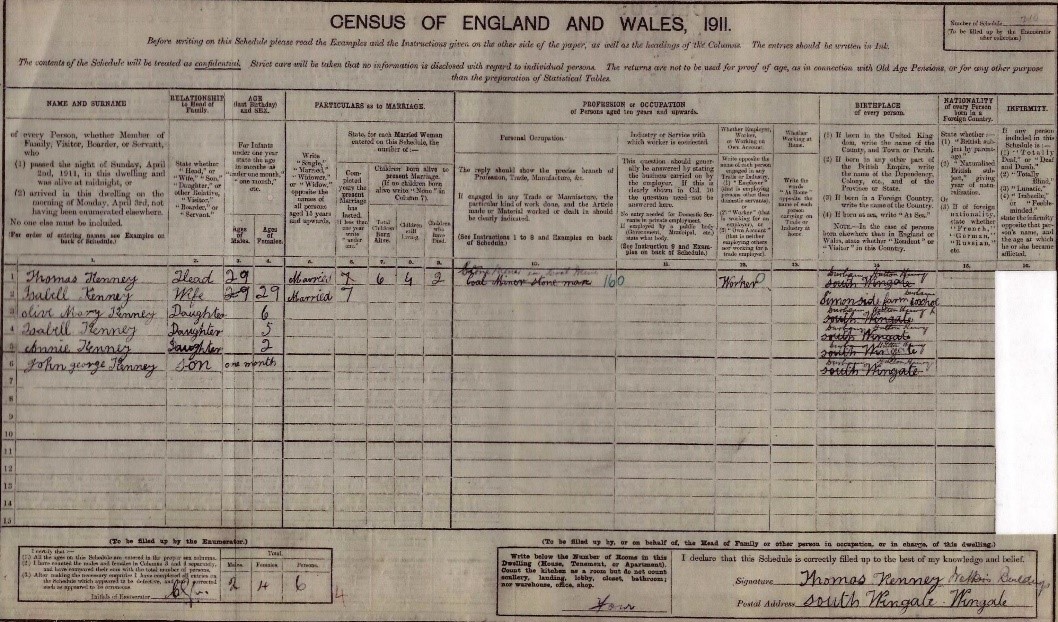 Reproduced with the permission of the National Archives

We can only guess at the reasons that made Thomas Kenny and thousands like him, in steady employment, leave his family, home and work in 1914 to join the Army. He was not conscripted and the production of coal was more important than ever with the onset of war but on 16 September 1914 Thomas Kenny was one of the new recruits for 13th DLI and served at Private 17424. 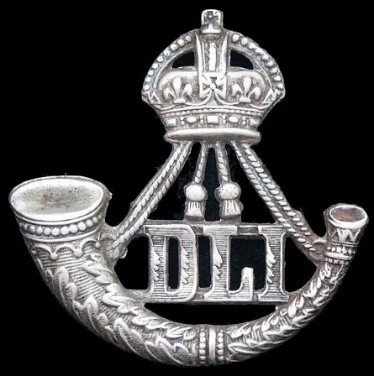 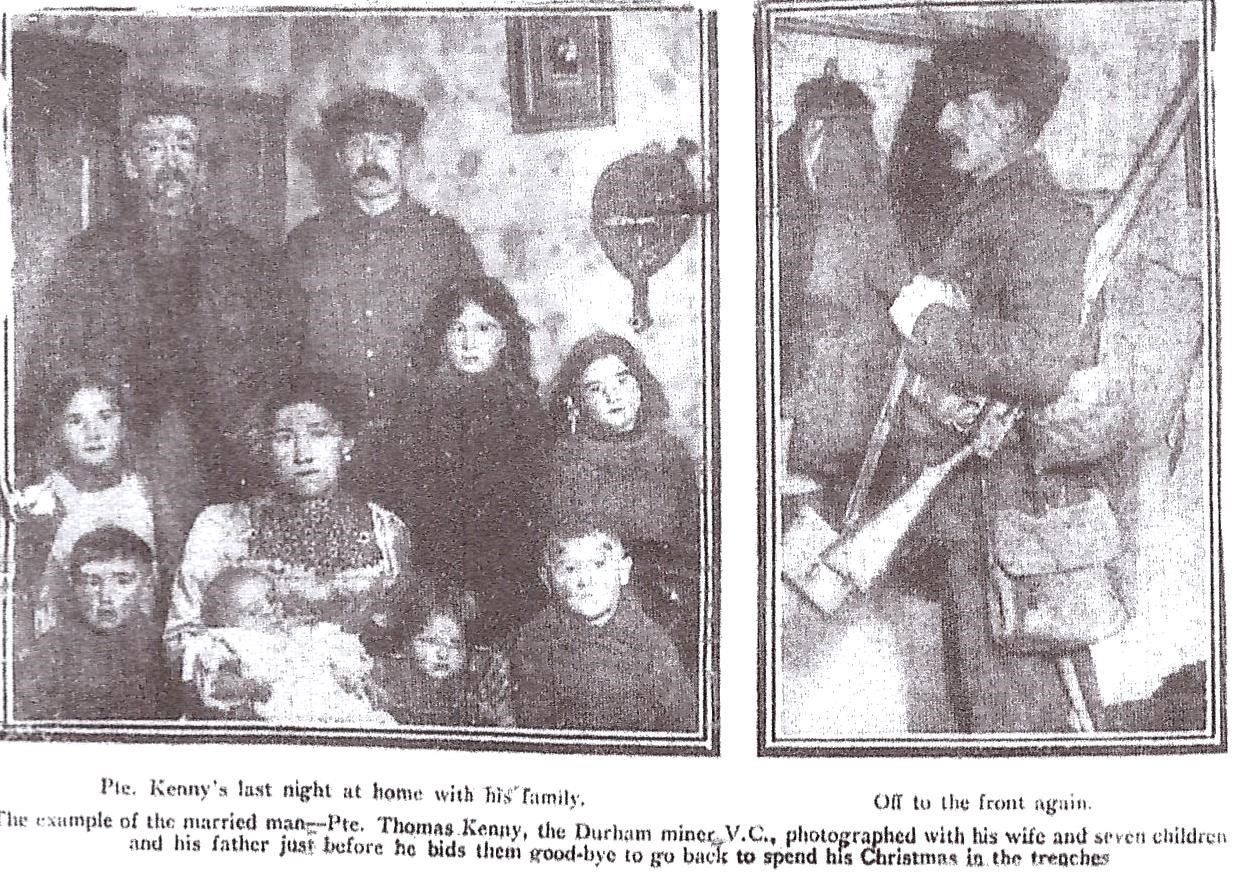 This is a picture of Thomas Kenny with his father, Darby, his wife Isabella and 7 of their children.

Kenny was sent, with his batallion to Bullswater Camp in Surrey for training. Once they arrived at the camp the difficult task of turning enthusiastic civilians into trained soldiers began.

This was made more difficult by the fact that there was a lack of instructors and experienced officers. Added to this was the shortage of uniforms, rifles and equipment and as if these things weren’t bad enough, the conditions at Bullswater camp were atrocious and the only living accommodation was tents and they lived in these conditions in the rain, mud and cold until the end of 1914.

Finally at the end of July 1915 Kenny’s Battalion were ready for active service at the front….

Kenny’s regiment landed in Boulogne on 26 August 1915, nearly a year after he had volunteered for active service. Training began immediately in France to prepare the men for the trenches and the battalion were asked to provide working parties, probably as a result of the high numbers of miners in their ranks.

Kenny’s commanding officer was Leiutenant Philip Brown, a lecturer at Durham University and for the Workers Educational Association. In a letter home to his mother, Philip Brown wrote:

“About 12.30am a man came and said he could hear moaning over the parapet. I was afraid that this meant that some of my men, who had just started on a listening patrol, had been hit. I went down, with my observer, a very nice Irishman from County Durham, who goes with me everywhere, and crept along a very shallow trench”.

The observer that Philip Brown mentioned, was Thomas Kenny and whilst Kenny was not Irish and nor was his father, and probably didn’t have an Irish accent, his grandfather was born in Ireland. 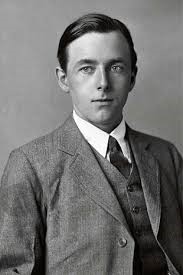 At 9.15pm on 4 November 1915 Lt Brown, the officer of the watch on this date went out to visit a party working on the barbed wire in front of trench 1.26.4. He was accompanied as always, by his observer, Pt Thomas Kenny. The rain had stopped, but with no wind, a thick fog covered no mans land. In the fog, the men lost their bearings and missed the working party. They went on until they realised they were lost in no-mans land. They sat down and tried to listen for any sound that might direct them back to their own lines and safety but hearing nothing decided to try and retrace their steps through the mud – it was about 9.45pm. As they rose, a single rifle shot rang out and Lt Brown fell, shot through both thighs.

Thomas Kenny at once went to the aid of Lt Brown and hoisted him onto his back. Immediately heavy rifle fire opened up from the German lines forcing Kenny to crawl through the mud with his badly wounded officer on his back. When the gunfire was too severe, he lay still, starting off again when the firing lessened.

Lt Brown begged Kenny to go on alone and leave him but Kenny refused. Their ordeal lasted for nearly an hour before Kenny, cold, wet and utterly exhausted stumbled upon a ditch that he recognised. He made Lt Brown comfortable and went to fetch help..

The Award and Citation

Thomas Kenny was the first DLI soldier to be awarded a VC during World War 1 for his actions in trying to save the life of Philip Brown and was promoted to Sergeant shortly after.

This is a copy of his citation which appeared in the London Gazette on 7 December 1915:

The presentation at Buckingham Palace

Kenny was presented with his VC by King George V in a ceremony at Buckingham Palace on 4 March 1916.

When he left the Palace, a lady waiting outside approached him and introduced herself as the mother of Lt Philip Brown. She had travelled from her home in Kent to meet the man who her son thought so much of and to thank him personally for his actions in trying to save her son’s life.

This was to be a long, lasting friendship between the two families and they are still in touch today. 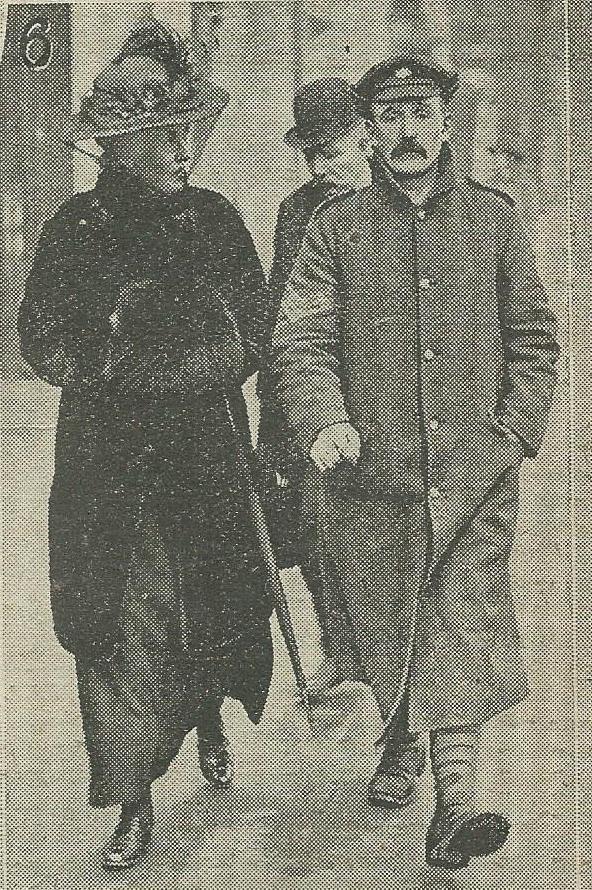 The presentation at St Mary’s School

On 11 March 1916 Kenny and his wife were invited to his old school, St Mary’s, Wingate and were presented with a marble clock, two silver vases and two bronze statues which pupils, parents and teachers had raised money to buy to show their appreciation of Kenny’s bravery.

When asked by a child at the school why he joined the Army, Kenny replied: “All I can say is that I did my duty in France to the best of my ability”. 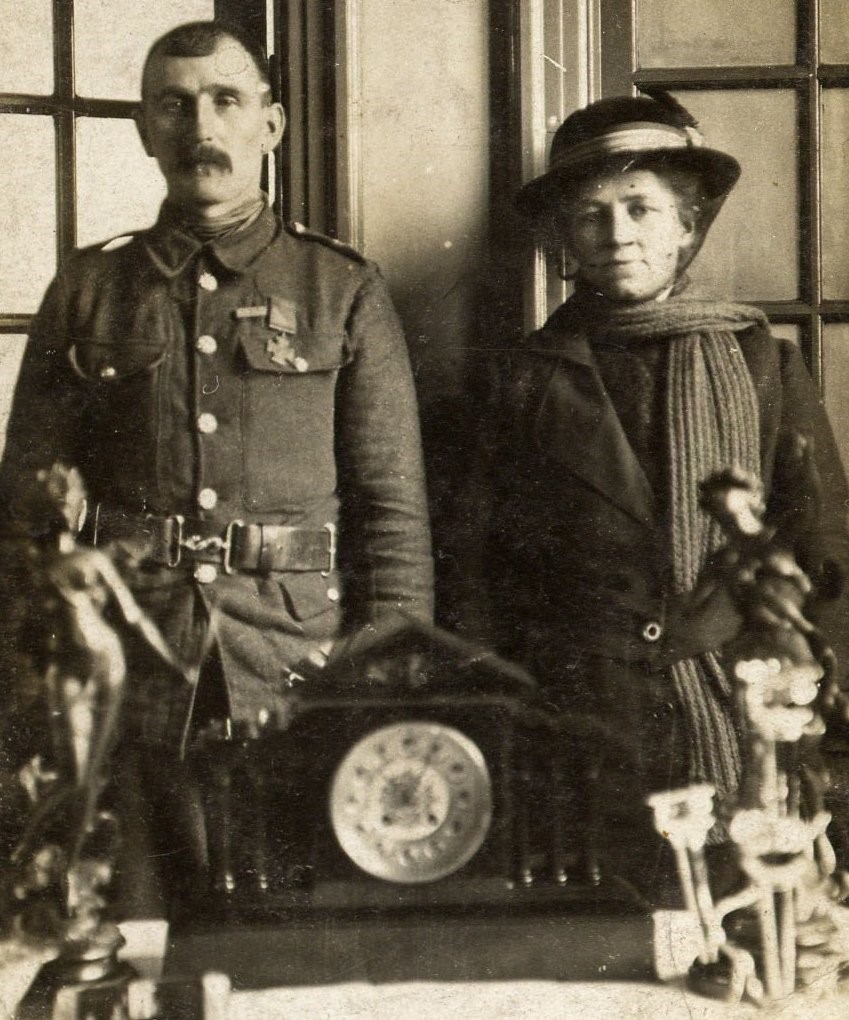 Thomas Kenny and his wife 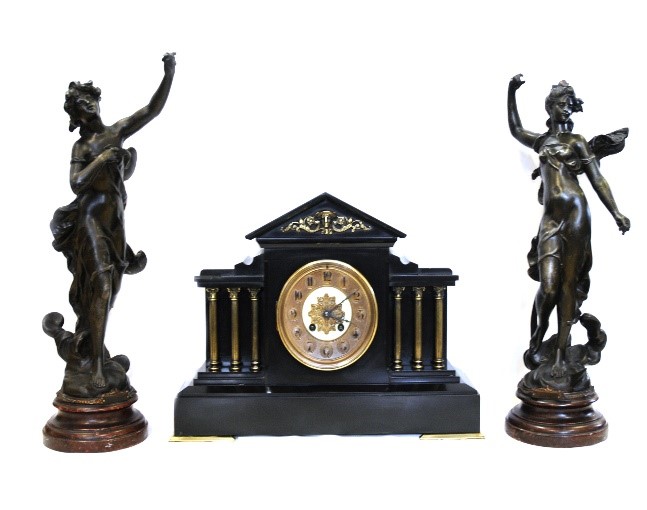 
Video of the Thomas Kenny Clock


Clicking on the clock above will pause the video
Clicking again will restart it.
Click the square at the bottom right corner to make the video full screen


Reception and Presentation
TO
SERGEANT THOMAS KENNY, V.C.
13th D.L.I
By the Teachers and Children of Wingate Catholic School,
11 March 1916

Poem written at the request of the children by P. LEAVY (a resident of Hutton Henry)

Welcome, welcome, once again
Hero brave and bold;
To the school where you where you were taught,
In the days of old.
We the present pupils,
Of Wingate Catholic School,
Were pleased to hear when death was near
You were so brave and cool.

Greater love no man can have
In life; no higher end –
Than that the life God gave to him
He would give for his friend.
And you, a former pupil, of
Our humble Catholic School,
Prepared to make the sacrifice,
Observed the golden rule.

Your deed was not performed,
In the glare of the limelight,
Oh no; you struggled bravely
On a dark and stormy night,
To save your gallant officer –
You did so strive and plan,
The office ’tis truly said
Was worthy of the man

For hours your wounded officer
You carried on your back,
With German snipers following
Close upon your track.
You had the satisfaction,
Tho’ his life you could not save,
Of laying the gallant soldier, in
A British soldier’s grave.

Upon our Roll of Honour,
We’re pleased and proud to see
This day attached to your name
The coveted VC
Your children are our schoolmates,
For you and them we pray;
And ever in our memory, keep
This as a happy day

Sadly the award made little difference to Kenny’s employment prospects in civilian life and when he returned from the War he worked at Wingate Colliery until he moved his family to Wheatley Hill in 1927. Here he worked as a Stoneman, underground until 1944 when, aged 62 and following a shoulder injury he finally moved to a surface job. In slight recognition of his wartime achievements, a drift was named after him at Wheatley Hill colliery – The Kenny Drift, but with the closure of the pit in 1968 that gesture has long since been forgotten. His name also appears in a Gilesgate Road, alongside other VC winners � Kenny Place.

He died on 29 November 1948 at Darlington Street, Wheatley Hill and is buried in the village cemetery 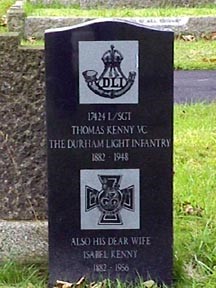 On 7 November 2015 – almost 100 years after he saved the life of his commanding officer, a paving stone to the life of Thomas Kenny was laid in Wheatley Hill cemetery by the Lord Lieutenant of County Durham.

This is one of the paving stones presented to local communities by the Department for Communities and Local Government to commemorate recipients of the Victoria Cross during the First World War.

Kenny’s was the the first of seven stones to be unveiled in County Durham. 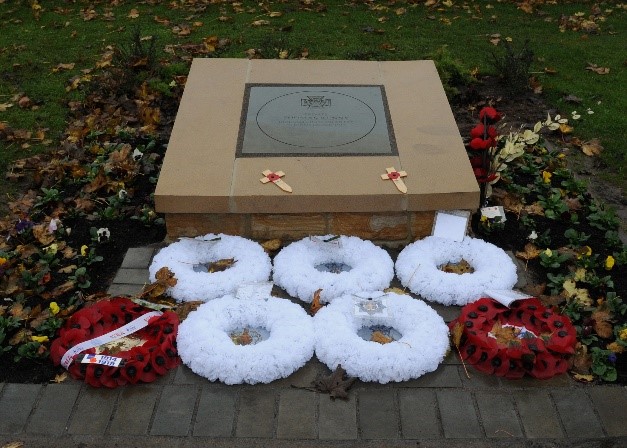 On 4 March 2016, a group of children from St Mary’s School in Wingate visited Wheatley Hill Heritage Centre to see the clock and statues that were presented to Thomas Kenny at their school in 1916.

The clock has been donated to the Heritage Centre by members of the Kenny family and will be on permanent display. 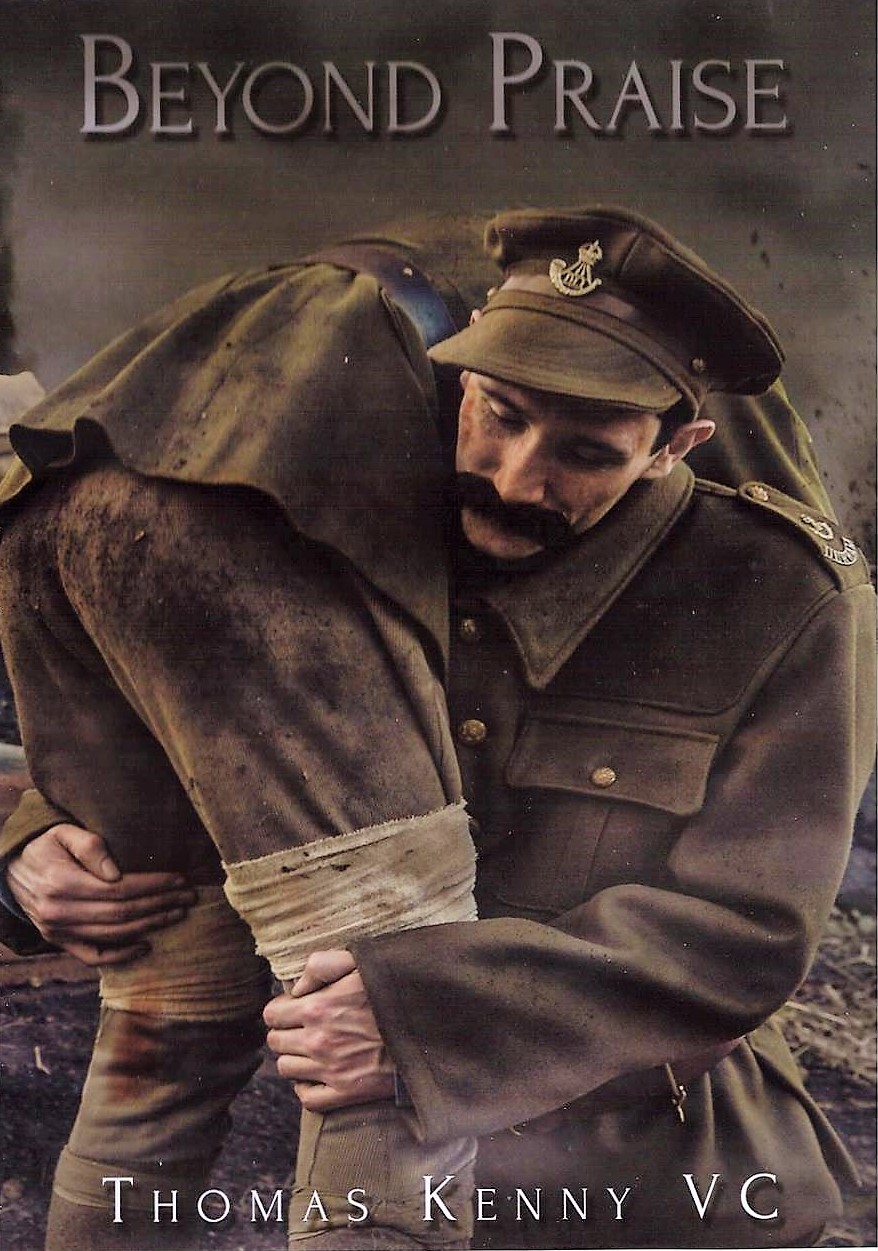 This documentary film commissioned by the Wheatley Hill History Club, tells not only his story, but the story of the incredible relationship between Kenny and the man he rescued, Lt Philip Brown. Running time: 1 hour 25 minutes.

The full film can be viewed below or via the link https://www.youtube.com/embed/lYgrCUQz4go